In my new video I’m sharing my top 3 tips to make language learning a bit more exciting and colourful, and to help you memorise vocabulary and grammar easier. Hope this helps and let me know in the comments if you have any questions or further advice! Hope you enjoy this video!

I feel like I haven’t really talked about university in my videos before, so now this was my opportunity! I really enjoyed making this video, so let me know what you think! Also if you want then answer some of the questions in the comments below and don’t hesitate to ask me if you have any questions!

Some of you have been asking me how I learned to speak English, so I decided to make this video to answer in more detail because I thought that it would be useful for those of you who are also learning a new language. So I also tried to sum up my top 10 language learning tips for you. Please don’t hesitate to let me know if you have any more questions, I would love to have a chat!

I have uploaded a second vlog of my trip to France! It has definitely been an incredible experience to spend two weeks in Rouen, and I am so grateful to my university for providing this opportunity! So as you can see in the vlog, me and my friend have also visited Paris, which was amazing!

Unfortunately the weather was not very nice, but I was still excited to go. This was my first time going to Paris, so I was very happy. We didn’t have a specific plan, we just roughly agreed to go to the Arc de Triomphe first, and then walk down to the Eiffel tower, then through Champ Élysées to the Louvre and finally to the Notre Dame. I was exhausted already halfway through! But I think it’s important to walk around when you visit a city for the first time, because if you take the underground you can’t see all the streets and houses. If you want the full experience, it’s worth it to walk.

Paris was just like I imagined it: beautiful buildings, art, history, elegance, and a lot of tourists. I wish I could’ve spent more time there, but I will definitely go back one day to explore the city more. This day was an amazing first impression!

After that, we tried to make the most out of our last days in France, so we walked around every day and also climbed up on a hill where the view was incredible! In the vlog I also wanted to show you that this trip was not only for being tourists, but for studying as well. I wrote another blog post about the full language learning process that I went through in these two weeks, so if you’re interested in that part of my experience, CLICK HERE TO READ IT.

If you have seen my vlogs on YouTube, you probably know that recently I went to France for two weeks to do a language course. I also stayed with a French host family, which was definitely a great experience. So in this blog post I am going to talk about the whole language learning process that I went through in these two weeks. I thought it might be useful for some of you who want to learn a language and go to the country where it’s spoken. If you have any questions, please let me know in the comments, I would be happy to help you and give you some more details.

So the reason this whole trip was possible, is my university. I study 3 languages and one of them is French, which I started from beginner’s level last year. I took an accelerated course, which means that I jumped two language stages in a year. The pace of this course was really fast, and I enjoyed it a lot because it was challenging. I always like to learn languages as quickly as possible, but it also means that I didn’t have the chance to fully process my knowledge. I know it is completely normal to not be able to speak much after learning a language for only a year, but I always felt behind everyone else in my class. So when we were told about the opportunity of coming to France for two weeks I got very excited, because I knew that it would help me get more comfortable with the language. 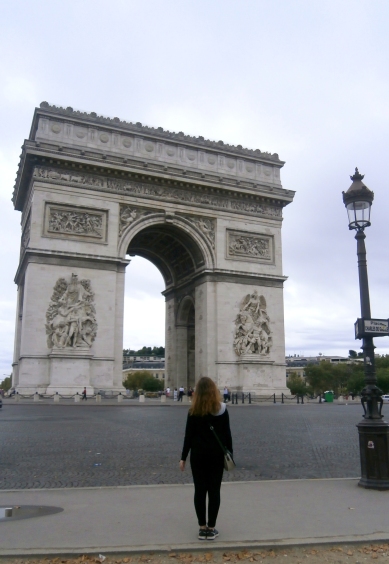 Honestly, I didn’t practice at all during the summer before going to France. I kind of forgot many things that I’ve learned at university, mostly the grammar. I was terrified before going even though I knew that I will learn a lot in France. The first couple of days were actually okay. I didn’t really speak much, just a couple of words with the host family. They told me I would speak fluently after two weeks, and I believed them. We started going to a language school every day from 10am to 1pm, and it was difficult, but I thought I can deal with it. Basically I just thought that I would magically learn to speak French in a couple days, but it didn’t happen that way.

The B1 level language course turned out to be way too difficult for me, as I ended up just looking around in silence when I was supposed to be working. I didn’t understand anything from the tasks I was given, and I just wanted to revise all the grammar that I forgot. So we talked to the teacher and we were put in a different group at A2 level. And it was so much better! We learned a lot of vocabulary that I could actually use outside of the class, and revised some parts of grammar that I have never been really sure about. The teacher was an elegant French woman, very fashionable and confident; her lessons were really cool and enjoyable. When I went home in the afternoon, I did the homework while listening to music and I just really enjoyed the course.

The communication with my host family, on the other hand, did not go very well. Because they told me that I would speak after a while, it kind of became a pressure on me. I thought that if I was supposed to be talking, why can’t I still talk? My anxiety came into the picture and then it was just done. I refused to speak, except for the occasional Bonjour and Merci. They probably thought that I was rude, but really I felt like there was a wall in front of me that prevented me from speaking in French. And I didn’t manage to make it disappear.

Let’s just concentrate on the positive side of things, though! I was able to order food in restaurants in French (at least when I could be bothered to make an effort). I definitely got more comfortable with the language. After a while it became normal to hear French words on the streets and saying Bonjour to everyone. I really enjoyed being in France, and it gave me motivation to study. After this, I will definitely make extra efforts during my second year at university.

If you want to learn a language quickly, I would definitely recommend visiting the country where it’s spoken. I definitely learned a lot, and it’s very important to be surrounded by the language for a while. And the fact that I didn’t really speak much doesn’t bother me at all, because I know that I just need a bit more time and practise. I will definitely get there one day! French is not one of the easiest languages.

What about you? What are your experiences with language learning? How did you come over your difficulties? Let me know in the comments, I would love to have a chat about it!

The next stop of my summer adventures was France, even though this trip consists of just as much work as fun. I study French at university, and they have offered my group a trip to France for two weeks to do an intensive language course. I am so grateful to my university, because I would never have been able to afford this trip, but it is an amazing opportunity to immerse myself in the language and get to know the culture. Together with my friend I am staying with a French family in Rouen, and they are the nicest, funniest people! There was also a cute Japanese girl staying with them, and they took us all to the beach for a day in Étretat.

On Sunday we went out for the first time to explore the town. We got an ice cream and then just walked around for a couple of hours. I absolutely loved everything! There are so many huge churches/cathedrals, and they all have the most detailed decorations. All the houses are so pretty here, the streets are filled with history and beauty.

The next day the studying began. To be honest I didn’t talk to my host family as much as I wanted to, because I got more and more anxious every time they were speaking to me and I couldn’t understand them, and it got to the point where I just gave up on any kind of conversation. I am still working on fighting my anxiety, but I am gradually getting better every day I spend here. It helped a lot that we went to French lessons, because I needed to be reminded of many things I already knew. At university I took an accelerated course, which means that I jumped two language stages in just a year. I learned almost all of the French grammar in 10 months, and it definitely wasn’t enough time to practice everything properly, so I feel like I don’t have a strong enough base to build on. But with the French lessons I started working hard again, and I think I am already better in French than I have ever been. Probably the best way to learn a language is to go to a country where it’s spoken and talk to people without being scared of making mistakes.

So we have French lessons every day from 10am to 1pm, and after that we have the whole afternoon to explore this amazing town and have fun. We usually grab a big sandwich for lunch and then walk around. We went to the art museum where we saw impressionist paintings from the end of the 19th century by famous French artists, and to the history museum where we followed the story of Jeanne d’Arc in a really cool and modern way. Both museums were incredible.

One night we went out to see the light show on the cathedral. Basically, videos were projected onto the front of it, and it was so cool and creative. The first one was of the Vikings and the other one was more creative and colourful. If you come to Rouen you should definitely check this out, because it’s very special and I haven’t seen anything like this before.

We are also planning to go to Paris, but that’s gonna have to be in another vlog and blog post! Make sure you are subscribed to my YouTube channel if you are interested to see my adventures in Paris. And please give my video a thumbs up if you enjoyed it!

WHERE TO FIND ME